Ok, so things have certainly changed around here. Originally this space was going to be for chronicling the goings on of the extended Gardner clan, but that never really took off. So I’m going to use this space to chronicle an experience I’d have loved to not have. I’m not gonna try to go all chronological, but more like stream-of-consciousness my way through this. So here goes… 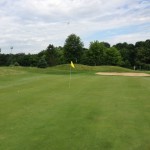 This was my tee shot on the hole before my internal golf ball started messing with my head!

Last weekend was sorta terrifying, in a surrealistic way. Friday was the final in a series of tests trying to figure out why I had these weird episodes, starting with the one on the golf course in July. My golf buddies basically forced me to go see the doctor about it, and so started me, with Nicole’s help, pulling the chain of medical tests. I didn’t recognize it at the time, but what I had was a ‘focal seizure’. Just teed off the 9th hole, and was going to put my club back in my bag. At the last moment, I changed my mind and then repeated that. Over and over again, just like a broken record. Finally I forced myself to turn around and broke out of it. Put my club back in and realized my golf buddies were talking to me. According to them, I froze for about 3 minutes.

Now I admit I haven’t been great about dealing with any personal medical issues. About 5 years ago I’d gotten sick a few weeks after earning my 2nd degree black belt in Tae Kwon Do. After 3 days in bed, I felt better, got up and told Nicole I was going to go down and make CJ breakfast. Started downstairs and everything went black. That was Jan. 3rd 2008. My next unreconstructed memory is from mid-March, when I saw my doctor (apparently a follow-up) and I distinctly remember being worried that I’d never regain my memory. He basically told me to stop being a baby and just get on with my life. I hadn’t seen him since till just last month.

Reconstructed from discussions with Nicole and my wonderful Outlook calendar (through which I have habitually chronicled my work and personal life) and a whole slew of emails, it appears I had a double-concussion, once when hitting the floor at the foot of the stairs, and again when I woke up, pushed past everyone and tried to go back to bed. I hit my head on a table corner and split it open. Aww gee, a trip in an ambulance I can’t remember, a couple of days in the hospital, and months of going from doing nothing to helping clients – all in someone else’s dream.

Anyway, back to more recent events. My buddies insisted I go get it checked out, and threatened to tell my wife if I didn’t. Even though I’ve been ignoring Nicole for years (since the fall 5 years ago) to get regular physicals and such, I knew I had to at least go in for a physical.  Saw my regular doctor, who told me that worst-case, it was a TIA and precursor to a stroke. Inexplicably, his advice for me was to lose 15 pounds and go immediately on statins to reduce my cholesterol. And possibly to see someone about the TIA incident, I don’t really remember if he told me to do that or not. But Nicole thought of that, and took me to see her mother’s neurologist. A great doctor, he listened patiently, and suggested a course of tests – corotid scan to check for blockage, ecg and sonogram of my heart area to rule out blockages there, and more. All those came out great, from a cardio-vascular standpoint I’m superman!

Which brings me up to date. Just this last Friday I went for the last test on his list – a brain MRI. The place’s name had “Open MRI” in it, so we weren’t expecting the usual coffin-sized tube, but that’s what it was. Worse was that after the test, the technician started asking me all sorts of questions about what was going on, certainly not what we’d have expected a technician to ask. I’m wondering if that guy was really the radiologist killing some time or saving money by not hiring a technician. He promised to send our test to my neurologist asap. A little worried, Nicole and I went to a nice place in Falls Church for our ‘anniversary lunch’. Did I mention that this day was our 21st anniversary? What a great present I gave my beloved! Just after we finished we got the call from my neurologist who had gotten the MRI report stat. The basic message was “You have a golf-ball sized tumor, and you need to get a neuro-surgeon and have it removed right away. And stop driving (you nut), you’re a seizure away from a crash!”. Ok, now it’s panic time, and both of us are starting to freak out.

But while still on the call, I remembered that I actually know a neuro-surgeon! A great client and I’ve been taking care of his household’s technology for over a decade. I mentioned his name to the neurologist who sounded…impressed? Anyway, I called his office and got the usual runaround – next available appointment being next month and all. Nicole says to me (while I’m still on the phone with them), that won’t do! They agreed to let us fax them the MRI report and they’d get in touch with the doctor.

So at Nicole’s insistance, I called his wife, and she called me back. At this point I’m totally freaked out and she picked up on that. She called her husband, exercising a surgeon’s spouse privilege, and he called me back in under a minute. Told me to get the MRI report and image CD to him asap and he’d look at it and call me back.

We spent a little time dealing with administrivia experts to get the report faxed to him, and then we drove over to his house and left the CD (which we had gotten from the MRI place) in his mailbox for him to see as soon as he got home. Our next stop was to the drug store to get the anti-seizure medication the neurologist told me I needed in order to forestall a major seizure which could? be imminent. Due to another mixup, that took a long time. In the parking lot after getting it, my friend and new hero, the neuro-surgeon called us back and gave us the skinny.

So good news and bad – I have what’s called a meningioma, a tumor that sits on the surface of the brain, between the skull and the membrane covering the brain. Almost always benign, and surgery is almost always successful and curative. Yay! But the dang thing is golf-ball sized, and putting pressure on my frontal lobe and where my motor control is. My new doctor was mildly surprised that I wasn’t experiencing any motor control problems, esp. on my left side.

As an aside, I was having problems but on my right side. During this whole process I’d had my right hip x-ray’d and that doctor remarked that he’s seen folks with much better x-rays who’d had their hip replaced. But we decided to put that off as long as possible, and I went on some strong meds to control the pain and reduce the inflammation, with PT to follow and help me keep it under control. Sort of.

Anyway, I had to stop the pain med and baby aspirin (ok, it’s PC to call it ‘low-dose’) regimen for my hip, and jump on this anti-seizure med. It makes me loopy, and I think I finally know what PMS is like now! We’ve scheduled a ‘contrast’ MRI for tomorrow at the ungodly hour of 6:45am so my new best friend can get a clearer picture of what he’s going to remove – I think in 9 days. So for now I can’t drive, operate heavy (or light) machinery, and am being babysat by everybody in case I seize up – a seizure at this point could be deadly and/or mean permanent and deep brain damage. Even Astro is taking a turn watching me!

So now I’m waiting for the 9 days to go by, sleeping a lot, and just doubled the dosage (per instructions) on the anti-seizure med (Keppra). After the contrast MRI, I’ll also go on steroids to hopefully reduce some of the extensive brain swelling I’ve got as a result of my golf ball pushing my brain to one side of my head.

Y’know, when someone mentions head lice, doesn’t your head itch? Same thing here, now I feel pressure in my head and a throbbing. Of course nothing till I’d been told about this, so it’s probably psychosomatic. And now the NSAIDs are nearly gone, so my hip is hurtin’ more – back to using a cane and limping.

I’m dang lucky to have some awesome friends who’ll help me see this thing through, a wonderful woman who is giving me daily meditation sessions over the phone, my golf buddy who’s visiting me and going to babysit me tonight while Nicole and CJ go to senior night at high school, my friend who’s going to be kidnapping me during the recovery so I don’t go bat-shit crazy, and of course my family. My sister Lisa (bless her soul) is taking some vacation time to come stay with us during the hospital stay, and of course Pam is doing research like crazy on all this, and will be taking care of business while I’m out.

Here’s a wonderful primer for what I can expect during recuperation, which could be short and nasty, or long and nasty: 20 things you can expect after brain surgery

. Note that my swelling from Marvin is pushing my left brain into my right brain - does that mean I was in my right mind?">

Posts on this blog, or any other social network, do not necessarily represent the views of the authors' employers. Furthermore, posts or links to other content do not imply endorsement, unless explicitly stated. Any elements on this blog that may be linked to or displayed, including trademarks, are for educational purposes only under fair use copyright law.